As I was finishing with the cool down stretches with my client, I prepared myself for the question that I knew was coming.  It had been a long day of training, putting my clients through rigorous workouts, checking their form, redoing measurements, encouraging and pushing for the better performance that I knew was in each and everyone of them.  I was tired, hungry, and digging deep to keep my energy up as the day rolled on.  Tom was lying on the stretch table while I stretched one of his very strong and very tight legs.  I had his heel propped up on one shoulder as I leaned my weight into the stretch, pushing his hamstrings into somewhat of a reasonable length.  Tom is a big guy, not in the sense of being overweight, though that is still kind of true, he is just big all around.  An old retired Vietnam veteran, he was nicknamed “half ton” because while in his time of service as a machine gunner, he once held up the back end of a jeep with his bare hands while a flat tire was being changed.  Needless to say, I had to put some effort into making sure he got an adequate stretch.

“So…” he began, and I knew my time had come…again.  It was a question he had asked me only about 50 times now in the past year or so of working together.  I tried pushing harder on his leg, hoping to stall him, but no such luck.

“How’s that speech coming?”  There it was.

I grinned, “Been working on it like crazy, almost done with it.”

He laughed. “That’s what you said last month, and the month before that.”

I protested, with feigned indignity, that it takes time to put together such a magnificent piece of art such as I was constructing.  He laughed again as I finished the stretch and pulled him up to a sitting position on the stretch table.  Getting his bearings, he paused for a second before looking straight at  me and saying something that stopped me cold.

“You know, it’s selfish of you not to share your story with the world…people need to hear what you have to say.”

Several years prior, I was honored with the privilege of doing some of the scriptural reading at my sister’s wedding ceremony.  Still having some usable vision at the time, I remember stepping up to the podium, pulling out my glasses from my tuxedo pocket, taking out my magnifier, and without hesitation, gazing out into the crowd and confidently reciting my lines with ease and passion.  My grandmother would later be quoted saying, “I think he missed his calling.”  A few years even before that, I was asked to be the keynote speaker for a Sports education camp for Visually Impaired youth, a camp that I both participated in and later volunteered at.  My first real public presentation, and I received three separate rounds of applause at the end of the speech.  The wife of one of my friend’s said that she had no idea that I could deliver a speech like that…frankly, neither did I, I just enjoyed talking to groups and trying to deliver a message to them.  It wasn’t anything I really had on my radar as a profession, or even as a hobby.  My ever-supportive wife had been telling me for years that I had a gift for speaking and I should use it.  I would just shrug, not necessarily disagreeing with her, but thinking to myself, what do I really have to share?  Sure, I’ve done some pretty cool things in my short life, traveled to some amazing places, met some really incredible people. 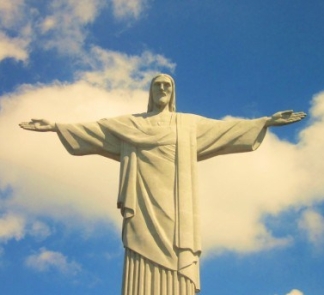 I have walked the Great Wall of China and stood under the famous Christ the Redeemer Statue in Rio de Janeiro Brazil.  I have white water rafted in the mountains of West Virginia, and rode a ferry boat from Denmark to Sweden.  I’ve been to the White House three times, met two U.S. Presidents, and competed in three Paralympic Games.  I’ve been to over fourteen countries, and nearly half of the states make my list for places where I have not just travel, but events where I stayed and did some exploring.  Add on places that I have skipped through just traveling to another destination and you could easily double those numbers.  I owned a home, raised kids, cultivated a wonderful marriage, and have had more blessings than I could even count, all of it because of or despite the fact that I am blind.

How would any of that help others though?  These were all things that I cherish and feel privileged to have been blessed with, but for those around me struggling with real life stuff, this is just a big list of things that someone else did, of no big consequence to the average day, so I thought.  Luckily for me, God, my wife Leanne…and Tom, are not to be brushed aside so easily, and one more thing happened that really made it click into place.

As I was walking home from work one day, I heard the oddest sound.  About forty feet ahead of me, a double  thump sounded off as a truck jumped the curb on the sidewalk and a truck stopped, blocking the walkway.  Out of the truck stepped a young man who walked back toward me as I trailed my cane along the edge of the curb, wondering what in the world this vehicle was doing.

“Hey,” the guy said, “I’m sorry, I know you’re leaving, I just wanted to say something to you real quick.”

“You don’t know me, we’ve never met before, but I’ve been watching you at work for the last six months.”  Alright, that’s a creepy start, but I was at least paying attention. He continued, “I just wanted to tell you before I left to go back home to Colorado, you have really changed my life.  Just watching what you do has inspired me to go home and fix some things in my life, and I just wanted you to know how much I appreciate everything you do.” I was a little taken aback.  I have had people say to me in passing how inspiring they thought I was, or how amazing they thought it was that I was out and about on my own.  Normally a polite smile and a word of thanks and how I’m just blessed like that is my normal response.  This was different though, This young man put his truck into park…illegally, but that’s beside the point… he climbed out of his truck and sought me out personally to explain to me what had happened, and it wasn’t just a little inspiration, it was a fundamental change in him.  After shaking his hand, thanking him and telling him that I would be praying for him, I walked on home, pensive and unsure, but excited at the same time.  Here was a person that I had affected at the root level, and I hadn’t even met the guy.  I felt good, like I had scratched an itch that I had been reaching for for some time.  And what I came to realize, was that my job as a Personal Trainer was not my calling, but a manifestation of my true passion… fitness was an avenue, but helping people grow, helping people better themselves, to give back even a small portion of the abundance of joy and life that I have been given, that was the core of it.  So as you read this, please recognize two things for me.  The first is that though I don’t feel worthy to be the person that may bring you to a better awareness of yourself and improve your life, I do feel that God has equipped me and called me to pour everything I have into attempting just that.  And the second thing, know that I care, I am genuine and have no reservations in saying that I care about you, and want nothing more than to see you succeed.  Follow me if you would, and my prayer is that through the many blessings that God has given me, I may bless you in return.  I am Tyler Merren, and I’m seeking the true champion within myself…and within you.

View all posts by tylermerren

31 thoughts on “The Journey Begins”